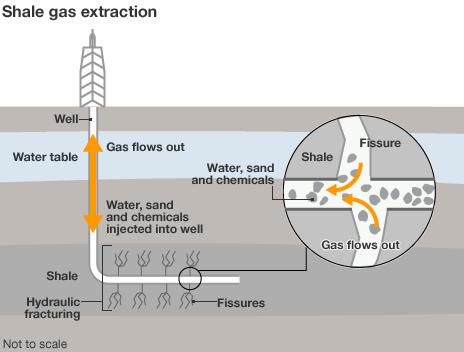 Fracking is the process of drilling into the earth creating wells and directing a high-pressure mixture of water, sand and chemicals at a rock layer in order to release the gas inside. The wells can be drilled either vertically or horizontally to release the gas.

Fracking within the UK

Fracking in the UK has had to face many public and legal challenges. Finally losing back in 2019 as fracking was indefinitely suspended due to a report by the Oil and Gas Authority that was inconclusive into earth tremors. However, due to exploration during this time identified that the UK had large swathes of shale gas.

Within the UK more than one hundred exploration and drilling licences were awarded to firms, however only one company Cuadrilla was the only company given consent to begin the fracking process. They had a site in Lancashire and drilled two wells but was faced with repeated protests from local people and campaigners on climate and safety grounds. The Oil and Gas Authority told Cuadrilla that by June 2022 the wells would have to be permanently concreted and abandoned.

Currently the UK can only meet 48% of its gas demand from domestic. This has followed a sustained reduction in UK gas production as existing gas fields are depleted.

A small number of Tory MPs, known as the Net Zero Scrutiny Group, have urged the government to end its fracking ban. They claim drilling at Cuadrilla’s two existing wells could be quickly restarted and would provide significant supplies.

Cuadrilla itself has claimed that “just 10%” of the gas from shale deposits in Lancashire and surrounding areas “could supply 50 years’ worth of current UK gas demand”. But energy experts dispute this. Mike Bradshaw, professor of global energy at Warwick University, says estimates of how much shale gas the UK has are not the same as the amount of gas that could be produced commercially.

Opponents of fracking point out that even if the ban were reversed, it would take many years for the wells to start producing gas commercially.

The injection of fluid at high pressure into the rock can cause earth tremors. More than 120 tremors were recorded during drilling at Cuadrilla’s New Preston Road site. Seismic events of this scale are considered minor and are rarely felt by people. However this was a big concern to local residents.

Fracking also uses a huge amount of water which needs to be delivered to the sites. This in itself can be a significant environmental cost.

Campaigners say fracking is distracting energy firms and governments from investing in renewable sources of energy, and encourages continued reliance on fossil fuels.

What are the government’s plans?

The UK government has said fracking will remain banned unless the science or the public position on it changes.

However, No 10 has refused to rule out lifting the government’s moratorium on fracking, saying “all options” would be considered as it considered how to end UK imports of Russian energy.

In its new energy plan released in March, Labour reiterated its position that fracking should not be restarted.