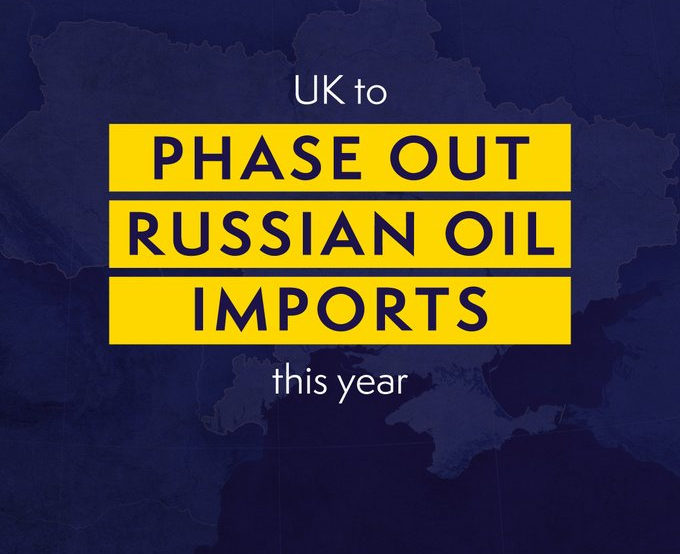 The phasing out of imports will not be immediate, but instead allows the UK more than enough time to adjust supply chains, supporting industry and consumers. The government will work with companies through a new Taskforce on Oil to support them to make use of this period in finding alternative supplies.

The UK is working closely with the US, the EU and other partners to end our dependence on Russian hydrocarbons in response to Russian aggression in Ukraine, recognising the different circumstances and transition timelines.

The import of Russian oil makes up 44% of Russian exports and 17% of federal government revenue through taxation – this move steps up the international pressure on Russia’s economy.

Russian imports account for 8% of total UK oil demand, but the UK is also a significant producer of both crude oil and petroleum products, in addition to imports from a diverse range of reliable suppliers beyond Russia including the Netherlands, Saudi Arabia, and USA.

Whilst this transition takes place, the government recognises the need to continue to import Russia oil in the meantime as we work to this aim. This will help ensure continuity in our supply and protect consumers.

In another economic blow to the Putin regime following their illegal invasion of Ukraine, the UK will move away from dependence on Russian oil throughout this year, building on our severe package of international economic sanctions.

Working with industry, we are confident that this can be achieved over the course of the year, providing enough time for companies to adjust and ensuring consumers are protected.

Unprovoked military aggression will not pay and we will continue to support the brave people of Ukraine as they stand up to tyranny, building on our existing sanctions that are already crippling Putin’s war machine.

We have more than enough time for the market and our supply chains to adjust to these essential changes. Businesses should use this year to ensure a smooth transition so that consumers will not be affected.

This significant move will increase the growing pressure on Russia’s economy by choking off a valuable source of income and hitting its ability to impose further misery on the Ukrainian people.

The elimination of oil imports is in addition to existing trade, financial and personal sanctions already imposed by the UK against Putin’s regime and those who support him in his war against Ukraine.

Russian oil is already being ostracised by the market, with nearly 70% of Russian oil currently struggling to find a buyer, and in a competitive global market demand will quickly be met by alternative suppliers. On 1 March Russian ships were banned from UK ports and authorities were granted new powers to detain Russian vessels.

The UK is not dependent on Russian natural gas, making up less than 4% of our supply. Ministers are also exploring options to reduce this further. The Prime Minister confirmed that the government will set out an energy strategy to set out the UK’s long term plans for greater energy security, including both renewable and domestic oil and gas supplies.